So, the exchange rate was good today,

into gobbing cash machine, with skilful

maybe sardonic that he’d been pushed

before bailing, but who'd hazard a guess?

A Sisyphos, once requiring improvement

needed no second chance to be so deft,

knew when the wagers of sin turn deaf

that all day’s fools gamble, frolic and play

when you think they’d run out of breath.

from brash new world to old and, hey,

if he could make quite so bold, to claim

so carefully pilfered in austerity’s name

by those great venerable master-shafters,

if all weren’t damned doubled up in grief,

battered from 12 rounds over toilet paper;

from mouths of those elderly consumers

who'd voted to leave is better than dead.

while engines of state, leaders of nation,

let it rip through bellies of the population.

count their blessings you're staying alive,

go on. Congregate in clubs, sup ale in pubs,

don't think about it too closely, but appreciate.

A clapped out nation sweats through its fate; Posted by Pete's Scribblings at 10:29 No comments:

Christmas, before any of this becomes written history,

he gave me tears and a journal. I left my lad behind,

scribbled in my voice, muttered from his future’s past.

And my Grandfather before him asked me for a diary,

to imprint each cool embered sunset on creamy sheets,

but he died before it was finished and hand slipped hand.

but turning over each page means one day less in turn;

they fall like leaves onto autumn lawns, plunge from trees

we run spider rakes through, comb each strand for glitter,

This journal will end in time. And, looking forwards I write

picture days when his time comes to read and look back. 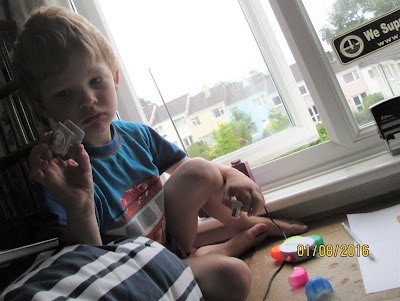 on carousels, bore them over misty mead

lay them heavy headed in beds to breathe.

impressions of someone that was once you.

In fragments, blank splinters of every soul

he claimed to be in every camera’s pinhole.

Father's fists in fury flew, but in basalt black

turned eyes towards a future that never came,

as both nowhere strode towards falling light.

unrepentant; Angel turns her back on home.

How heavy these hangman’s hands tighten

about his neck, seconds refuse to lighten

whispers; it is right that heartbreak can kill.

Beat. Be still no more. If it be true that all

the things they gave you add up to the fall,

then from beneath these gathered shrouds

Awaken. If only in spite, if only in revenge,

if only in savage desire to unmake amends

Blink. Blank without the kiss of kind words,

this brave world, where pity is seldom heard

wait no more on deliberating judge or jury.

Rise up. From summerlands forever parted,

sentence those who left us broken hearted. Posted by Pete's Scribblings at 08:44 No comments: