“Who was that man who stayed last night?” enquired a small, blonde girl, stressing the ‘was’ in a manner that suggested she had not been impressed.

Her mother sighed; put down the hip but essential Smartphone she had been fiddling with and looked at her daughter’s level, blue eyes. “He was the minister,” she answered, “for education.” She picked up her phone and did not wait for a response; sure that this information was impressive enough to stop further comment.

“He smelt of cabbage.”

Mother frowned and applied some lippy, gazing into the mirror on her dressing table. “He did not smell of cabbage. People don’t smell of cabbage, Hannah, especially not when they work for the Government. The Prime Minister has strict rules about things like that.”

“He did,” insisted Hannah. “Once he’d gone to bed I didn’t get any sleep at all with him snoring and farting all night. Had he been eating a lot of cabbage, Mum? Do they have it for lunch in Parliament?”

“I’ve told you before, Hannah, not to use words like farting. It’s ‘breaking wind’.” Mother snapped the lipstick case shut and it made a brittle sound like a finger click. Then she was on her Smartphone, back turned to her daughter. Hannah gazed up at the bell shaped blonde hair, curiously and listening. Mother sat down on the bed, her back pushed into the pillows against the headboard. She glanced at Hannah with a look that ordered silence and spoke, using her important voice. “Paula Seviour, MP.”

“I just wanted to thank you for last night. You were wonderful, darling and…” Paula switched off the speaker quickly, put the phone to her temple and covered her mouth with her right hand to restrict the sound of her voice and to hide her expression from Hannah. The rest of the conversation was conducted quietly. Occasionally, Paula snickered. She sounded like a satisfied pony.

Eventually she put the phone down and looked at her daughter with mock surprise and perhaps just the faint trace of a smile. “Hannah. You’re still here. You weren’t supposed to hear that.”

“That was him, wasn’t it? Minister for making smells like cabbage.” Hannah looked cross. “I’m very tired. Too tired for school. I feel crap.  You needn’t look like that, it was his fault.”

“Don’t use words like crap, Hannah,” said her mother again. “Your father and I…” Her voice tailed off. Paula mentally kicked herself. Quite the wrong thing to say.

“I miss dad,” snapped Hannah. “He wouldn’t have kept me from sleeping and he never smelled like rotting vegetables.”

“I’ve got to go. An important meeting.” Paula spoke quickly to avoid a familiar argument. She swung her legs off the bed and stood up, confronting her daughter. There was not much difference in height between them. The eleven year old girl was quite imposing, something she had inherited from both her parents.

“I’m not going to school.” Hannah kicked at the foot of her mother’s bed, sulking.

“You’re going because you are my daughter. I can’t talk on telly about sink estates, bad parents and poor attendance then have the welfare officer turn up here, can I? Not at all good for my image. In any case,” continued Paula, persuasively, “it’s Friday, weekend tomorrow, you can have a lie in and then you can spend your allowance in town. A treat because I’m going to be busy over the next few days.”

Hannah’s lips twisted downwards, the lines deepened on her forehead and her eyes looked angry. “Again?” The single word was more of an accusation than a question.

“Now don’t get stroppy, Hannah, you know I have to work hard to keep us. I’ve arranged a sitter and I’ll be home, just later than I’d like. I don’t enjoy it, you know? You’ll understand when you get a bit older.”

“I am old enough to understand, mum,” snapped Hannah.

“Good. So you’ll go to school, then. It won’t always be like this, you know. Now look, can you fix yourself some breakfast? You know where everything is. No cooking.”

Paula walked to the stairs, followed by her daughter and both descended, her mother with a quick gallop and then Hannah at a slower pace with heavy and reluctant steps. Reaching the bottom, Paula glanced quickly into a mirror by the door, gave her public smile a quick workout, grabbed keys and left.

As the door clicked behind her, Hannah scowled and listened for the departing car. Hearing the scrunch of gravel punished by tyres, she slouched into the kitchen.

Hannah thought about staying at home, but her mother was right, they did check these things and send people round. Instead, she grabbed an apple, lifted a tenner from the bowl with the cash in it, swung her satchel over her shoulder then followed her mother out into the cold, November air. 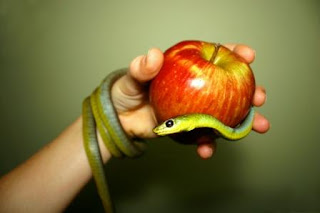 Posted by Pete's Scribblings at 09:49